In 2015, there are 16 Hand pump technicians covering the 13 chiefdoms of Bombali district and who are regularly supervising almost 500 hand pumps out of the 1300 and more existing ones in total. 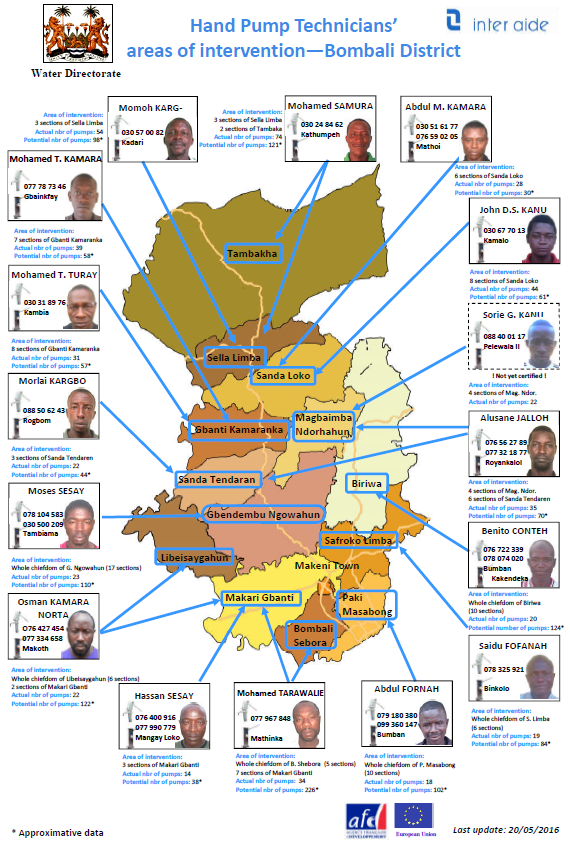 Saidu Fofanah is one of the hand pump technician. Saidu is 45 years old, he contracted poliomyelitis at the age of 10. The fact he needs crutches to move does not prevent him to support his community by repairing their pumps. 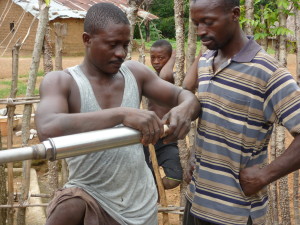 He has been identified by Inter Aide to work as a hand pump technician in Safroko Limba chiefdom in 2014. 86 hand pumps have been inventoried by the team in Saidu’s catchment, he has been able to intervened in 18 of them so far (despite the Ebola crisis, and the restriction of movements as well as suspicion by the villagers of visitors it entailed).

He was until now under observation and on-the-job training by Inter Aide but he will be soon confirmed at this position and will get his own toolbox in September.

He was initially in competition with Mr. Pa Tamba for this position of pump technician for Safroko Limba chiefdom. Both of them had already good knowledge on pumps repairs but as Pa Tamba was known in more communities than Saidu, and maybe the worry concerning the ability of Saidu to move easily from one community to another to promote his services or just to access the needing water committees by himself made the first choice of Inter Aide to collaborate with Pa Tamba.

Unfortunately Pa Tamba was not serious enough as he was overcharging the villagers for interventions and because some repairs were not good enough to last long. Therefore, Inter Aide decided to promote Saidu. Despite the fact that he doesn’t know how to read and write and his handicap, the choice of nominating him as pump technician was not so difficult knowing his involvement in the community: in parallel of his activity in a growth centre since 1988 to train young people on insertion business such as carpentry or welding, Saidu was already doing hand pump repairs on his own during the five past years. Indeed, after being volunteer for a three weeks training at the district council, he was operating on demand of the communities – approximately already 11 communities in 2010. He was paid at that time 20 000 Le per repair but he was managing with local tools which made it difficult. This promotion made it official and professional…

After one year and a half (Ebola put on stand-by the activities and slow-down the process), Saidu has been officialised and get his tool box in September 2015. The Inter Aide team noticed during this period that he has strong technical knowledge especially on India Mark II and PB2 hand pumps but less on Kardia – this has been corrected with the training of September ! He has always been motivated and serious and is relevant in the messages delivered during community meetings, although the training was necessary to clarify the difference between repair – for sudden breakdown – and maintenance – regular preventive checkup and diagnosis to clean the whole system of the pump, to identify parts that need to be changed before it breaks and causes more damage…

Saidu is dynamic but we could also say that he can be a bit tough while operating and has to work on his patience to explain to pump caretaker !

Despite his handicap, Saidu intervened in 18 communities since a year and a half (and despite Ebola) . It doesn’t seem a problem as he organised himself to make his job easier, like installing pipes and tools, tool box on two benches so that his hands can reach everything easily, and he received support from the water committee (as it supposed to be for all pump technicians anyway). He is also very agile and strong as he can screw cylinder on pipes with his leg on his crutch ! see pictures below. 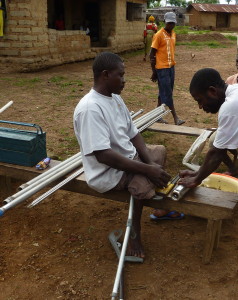 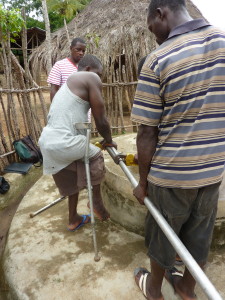 For now, he is busy intervening on hand pump approximately 3 times per month, but he is expecting supervising around 60 hand pumps in the near future.

His elder son (he has five children) is helping him by transporting him to the sites with his motorbike (or okada in Kryo).

When we asked Saidu how the people perceived his handicap, he said they were curious at the beginning, but what we observed is that Saidu is well known by the communities and is someone who was already involved in lot of activities to support and help his community.

During Ebola, which started around May 2014, people were confined and movements were reduced to the strict minimum to avoid the spray of the virus. Almost all activities were on standby, including Inter Aide programs. The constructions of new water points or rehabilitation especially were on hold as it was not relevant to move to new communities – although the team did a lot of sensitization and prevention related to hygiene and measures to follow in case of suspicion of sickness – washing hands and consulting treatment centre – in the communities where we used to work, in particular in the north of Bombali around Kamakwie.

For example, for Saidu, during this almost one year period – activities restarted in May 2015 – he received only one call in February 2015 from a desperate village: one Ebola spot community contacted the authorities and send security guards and the police to collect Saidu for a repair. He came to diagnose and fortunately the community had the required connecting rods that were to be changed. For this particular intervention he used gloves and long leaves and used the chlorine available at the community. 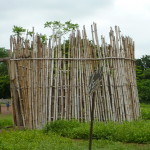 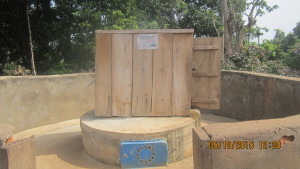 The communities increased the protection of their well or hand pump during Ebola crisis: it was perceived as a poison that could infect water, therefore they increased the height of the fencing (left picture) or compartmented the pump in a wood box (right pictures).

The team has been invited by the local radio (radio Okentu) to explain the strategy of maintenance, its objectives, why it is important for the communities to adopt such strategy. It was also the opportunity for some representatives of the hand pump technicians to talk about their job, explaining to the audience that they can intervene for repairs but also for regular visits to control the pumps and proceed to the routine maintenance.

They answered to some questions of the listeners.

Listen to the records here (a bit of notions of Kryo should be required though).

The team also talked about household water treatment and chlorination. The following documents have been created to help technical persons for operating the installation and the maintenance of the pumps:

There is also a guide here for the chlorination of the wells.